Banca March: fifth best place to work in Spain and, for the second year running, the only Spanish bank to make the Great Place To Work® ranking

The bank has secured the strongest results in all three of the years it has achieved GPTW certification.

Banca March is the fifth best workplace in Spain according to the Best Workplaces ranking compiled by the independent consultant Great Place to Work®, being the only bank to make it onto the ranking for the second year running. The bank, which boasts the strongest capital ratios in the Spanish financial system, has boosted its position since the previous year which is further recognition of the unique business model built by the bank, based on leadership in capital ratios, responsible advice, a solid reputation, service quality, advisory technology and people management, with the best-trained professionals in the Spanish banking sector.

According to the indicators that the consultancy firm uses, Banca March has improved or matched its scores in the 80 statements included in the study over the last year. Once again, Banca March scored particularly highly in the categories of culture of excellence and sense of pride in belonging, which is where the bank has secured the strongest results in all three of the years it has achieved GPTW certification: 94% of employees feel proud of their achievements as Banca March professionals and 91% say they want to continue to work at the bank. 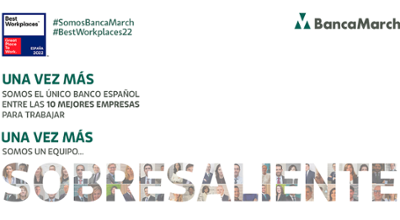 This strong score is replicated among the Banca March professionals who believe their superiors run the business honestly and ethically and who believe that working at the bank is a good job.

The scores that have improved the most overall this year are in the areas related to the digital transformation, service provision and camaraderie within the organisation. An impressive 79% of Banca March professionals believe the bank is advancing digitally and competitively, 88% believe that Banca March customers would rate the service provided by the bank as "excellent” and 88% say there is camaraderie and mutual concern among the bank's employees.

The results also revealed a corporate climate of respect for people and for the Banca March business project. The fact that the bank was included on the Great Place to Work® ranking for the second year running —in the +1,000 employees category— clearly reflects the successful implementation of the Strategic Plan for Human Resources in recent years, with a view to improving the management of professional talent and generating a high-performance corporate culture.

This is the latest in a series of certifications last February, when Banca March was awarded the Great Place to Work® and Top Employers certifications. The bank was certified as a Great Place to Work for the third year running in recognition of its culture of excellence and the sense of pride in belonging, as well as its strong people management practices and policies. In 2022, for the fourth year running, the bank was also certified as Top Employer, awarded by the consultancy firm Top Employers Institute, for achieving an excellent working environment, building a high-performance, results-driven organisation underpinned by the ethical values of professionalism, expertise, meritocracy and responsible banking.

Anselmo Martín-Peñasco, Deputy Managing Director of Banca March and head of the Human Resources area, stated: “Banca March has consolidated itself as the best manager training facility in the Spanish banking industry due to its people management model based on training and specialisation, recording the highest level of investment in training in the sector. We have the best trained managers and we provide them with a workplace that places an emphasis on meritocracy and competitive working conditions, where they can build a long and fruitful career".

Jaime Nardiz, Innovation and Cultural Transformation Director at Great Place to Work: “When I'm asked about examples of progress and cultural change, Banca March always comes to mind. In recent years it has spearheaded a solid, sustainable and people-oriented business strategy. As a result there is a feeling of immense pride over what is being achieved, with 88% of people believing that customers would rate the service as excellent”.